Kartik Aaryan, Bhumi Pednekar, and Ananya Panday have stolen everyone’s heart with the recently released trailer of Pati Patni Aur Woh. Fans are loving the chemistry of the trio and it’s getting a positive response from all over. 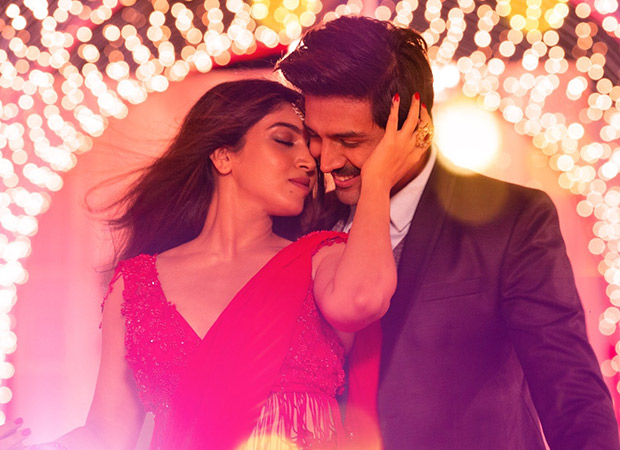 After treating everyone with the hilarious trailer, the makers have unveiled the first song today which is titled 'Dheeme Dheeme'. The song features Kartik, Bhumi & Ananya grooving on this dance number.

Sung by Tony Kakkar & Neha Kakkar, 'Dheeme Dheeme' is composed by Tanishk Bagchi. The song depicts the vibe of the film and its tune will make you hit the dance floor. The song showcases Chintu Tyagi’s two different worlds. In one frame, he is seen dancing with his Patni Bhumi and in the other, he can be seen setting the dance floor on fire with his Woh Ananya.

Producer Bhushan Kumar says, “'Dheeme Dheeme' is a peppy dance number and we are hoping that the audiences will love the new version too. Kartik, Bhumi & Ananya have taken the song to the next level with their chemistry. Apart from this, the film also has other great songs and we can’t wait for everyone to see them.”

Producer Juno Chopra (BR Chopra) says, “'Dheeme Dheeme' is my personal favourite because it portrays the characters of our film and especially shows Chintu Tyagi living two different lives with the Patni and the Woh. When I heard the song I loved it and especially the hook line “Dheeme Dheeme” is so catchy and stays with you. I had such fun collaborating with Kartik, Bhumi, Ananya, Bosco on this song. I hope that it gets the same kind of love how the original version received.

Singer Tony Kakkar says, “Really happy that 'Dheeme Dheeme' is back again in Pati Patni Aur Woh. It makes me feel special that song features Kartik, Ananya, and Bhumi. I am sure that the audiences will love this new version too.”

Choreographer Bosco Martis says, “It was such a fun ride choreographing this song. Working with Kartik, Bhumi & Ananya, was not at all a teaching experience but more like a party session. Those were the happy dancing days with the trio.”

Pati Patni Aur Woh is produced by Bhushan Kumar, Juno Chopra, Krishan Kumar, Produced under the banners T-series and BR Studios. The film is all set to hit the theatres on 6th December 2019.